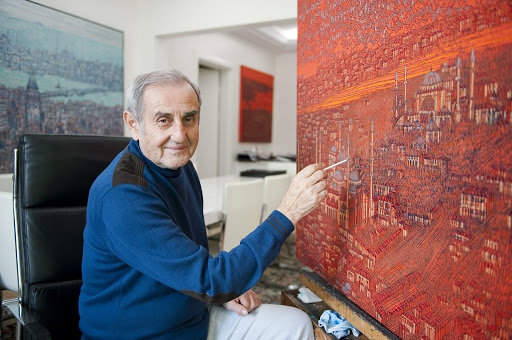 Devrim Erbil opened hundreds of exhibitions at home and abroad, won awards and gave art conferences. The works of the artist are in many museums and collections of the world and Turkey. Devrim Erbil is the poet of painting.

Devrim Erbil was born on September 16, 1937 in Uşak. After graduating from Balıkesir High School, he studied at the Painting Department of the Istanbul State Academy of Fine Arts (Mimar Sinan Fine Arts University) between 1955-1959. He became a student of Halil Dikmen and Bedri Rahmi Eyüboğlu. He entered the Academy as an assistant in 1962. He worked in the workshops of Bedri Rahmi Eyüboğlu, Cemal Tollu and Cevat Dereli. Devrim Erbil opened his first exhibition at the Turkish American Association when he was still a high school student.

He conducted research and examinations in various countries. Devrim Erbil‘s linear paintings, which started with nature/tree motifs in the 1960s, reached a bird’s eye view in time. Devrim Erbil founded the “Blue Group” in 1963 together with Adnan Çoker, Tülay Tura, Altan Gürman and Sarkis Zabunyan. He continued his art studies in Paris and London, which he started in Madrid and Barcelona, where he went after winning the art scholarship exams of the Spanish Government.

Devrim Erbil, who became an Associate Professor in 1970, served as the President of the Contemporary Painters and Visual Artists Association of Turkey. Between 1979-1982, he worked as the Director of the Istanbul Painting and Sculpture Museum and became a professor in 1981. The artist, who started as the head of the Painting Department of Mimar Sinan University Fine Arts Faculty in 1985, continued this duty for three years. Between 1988 and 1990, he was the head of the department at Yıldız University Fine Arts Faculty. In 1990, he became the vice dean of Mimar Sinan University, Faculty of Fine Arts. He received the title of State Artist in 1991. He retired from Mimar Sinan Fine Arts University in 2004.

Devrim Erbil opened many group exhibitions abroad. He was the commissioner of the exhibitions promoting Turkish Art. He gave lectures and published articles on art. In 2004, a special museum named Devrim Erbil Contemporary Art Museum was opened by Balıkesir Municipality. Devrim Erbil served as the founding Dean of the Faculty of Art and Design at Doğuş University in 2004 – 2005. He is also a member of the Board of Trustees of Istanbul Kemerburgaz University.