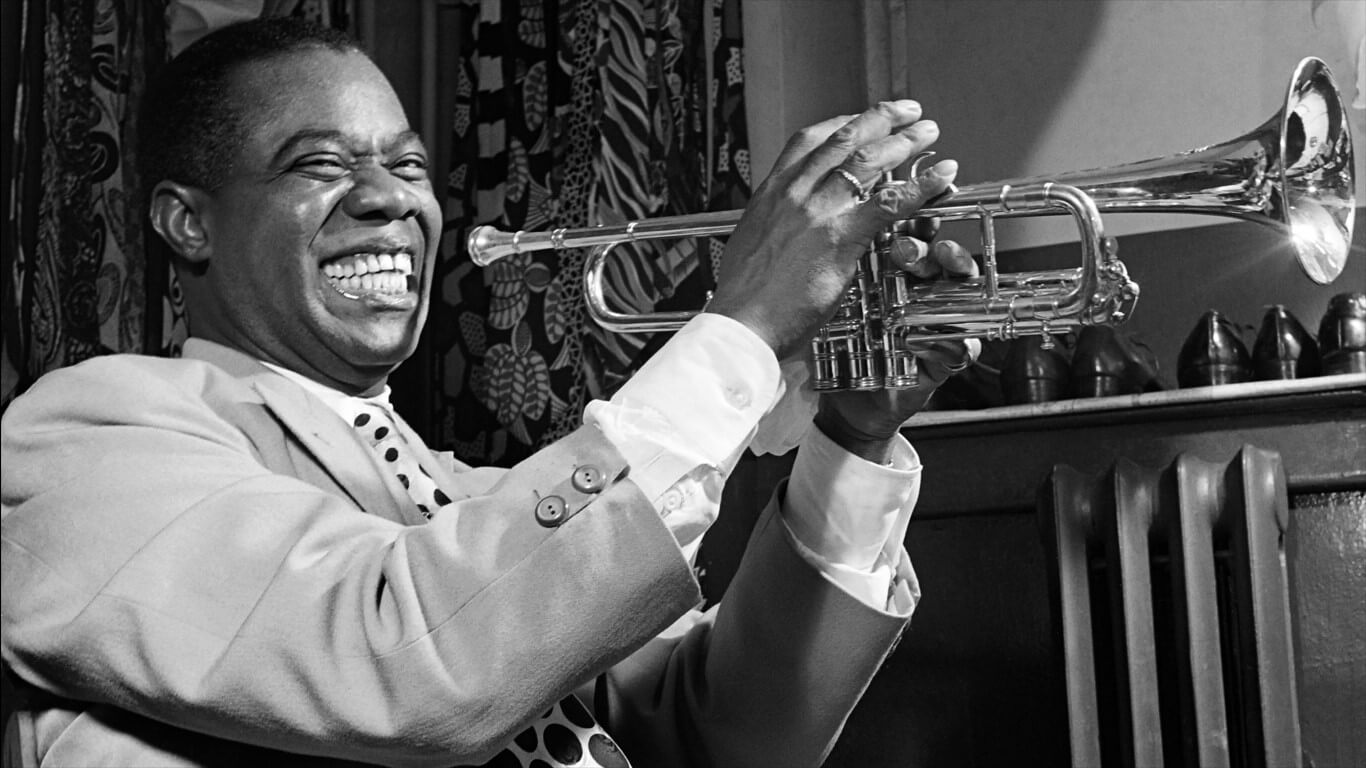 Louis Armstrong’s childhood was spent caring for his mother and younger sister. He received no formal education but was an intelligent boy and quickly acquired the “street knowledge” necessary for survival. Besides regular work, he started to earn money by singing in the streets. He later played in marching bands and on the riverboats of New Orleans. He started working with the well-known music group Fate Marable on a steamboat on the Mississippi River.

On New Year’s Eve, when he was only 11 years old, he opened fire randomly on the street with his stepfather’s gun and was sent to a reformatory. He took part in the music choir of the reformatory first as a singer, then as a percussionist and then as a cornet player. A few years later, when he got out of the reformatory, his only goal was to buy himself an instrument and continue his music. He distributed coal with a horse-drawn carriage to earn money. Meanwhile, he was making music with every band he could find with the cornets he borrowed.

This different young man soon caught the attention of Joe “King” Oliver, one of the city’s most important jazz musicians. Oliver took him under his protection. His partnership with Oliver opened many doors for Louis Armstrong. Although he initially refused, upon Oliver’s second invitation, he went to Chicago to work in his orchestra. And that was the turning point of his career. After a while, Louis Armstrong met the pianist “Lillian Hardin” and they got married in 1924. He then went to New York, joining the orchestra of the most famous African-American band of the time, Fletcher Henderson. When he returned to Chicago in 1926, he was now quite famous.

He returned to Chicago in 1926 and released the famous album ‘Hot Five and Hot Seven’ under his own name, which included the hit songs ‘Potato Head Blues’, ‘Muggles’ and ‘West End Blues’. The trumpet entry in Louis Armstrong’s song ‘West End Blues’ is considered one of the most famous improvisations in jazz history. With his musical talent and creative personality, he transformed jazz from regional dance music into popular music. Having achieved his first career successes as a trumpet player, Armstrong later became one of the most important jazz singers.

In 1926, he started a joint club with two musician friends. In the 1930s, he left the cornet and turned to the trumpet. He performed with Les Hite’s orchestra in Los Angeles and with Chick Webb’s orchestra in New York. He made his first visits to Europe in 1932 and 1933. Armstorng settled permanently in Queens, New York in 1943, after touring New York, Los Angeles, and then Europe.

After World War II, Louis Armstrong became a worldwide known and loved artist. He gave concerts in many countries and met with his fans all over the world. His songs were playing on all the radios. It was highly appreciated and admired, especially by the citizens of African states that had just gained their freedom at that time. Hundreds of thousands of Louis Armstrong fans attended the concert he gave in Africa in 1956. By the 1950s, Armstrong had become a major internationally recognized musician.

Louis Armstrong ended his marriage to Lillian Hardin in 1924 in 1938. He married Alpha Smith the same year. He then divorced again in 1942, this time married to Lucille Wilson, with whom he would spend the rest of his life.

Continuing to give concerts while hiding his heart condition from the press, Armstrong died at the age of 69 in his own home in Queens New York on July 6, 1971, due to a heart attack.