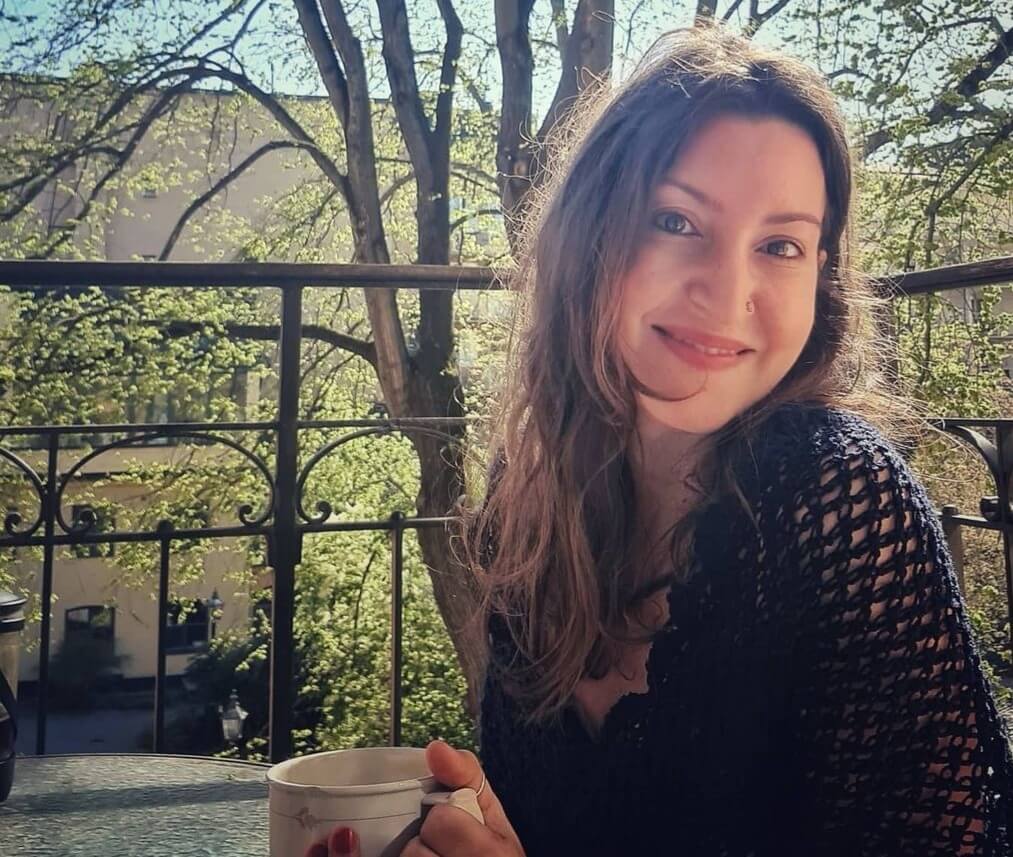 I am happy to introduce Defne Çizakça to you, a young Turkish – Dutch writer who works across several languages and cultures with a focus on magical realism, historical fiction and fairy tales.

You come from a mixed background, your father is Turkish and your mother is Dutch. Has this impacted your writing at all?

Yes, I believe it has. I feel very comfortable with pieces that seemingly don’t fit together. And perhaps having a mixed background has also given me an eclectic point of view.

I went to kindergarten in the Netherlands and spent many summers there with my grandmother. I was bullied by other children for being darker than usual, for being a foreigner. The opposite happened when we moved to Turkey. Here, I was always welcomed a little extra for being part stranger, part European. So I got used to carrying an “otherness,” within me. Whether that was frowned upon or found alluring was not under my control. My heritage made me curious about these liminal spaces, about wavering, uncertainty, being neither here nor there, neither this nor that. I hardly ever write about myself, but I am always drawn to these themes from childhood.

When it comes to fairy tales, essays and stories you have creative and academic works in both English and Turkish. You have edited “New Fairy Tales: Essays and Stories,” Unsettling Wonder: Tales of Kismet, Changelings, Why Would Anyone Enchant That? Fairy Brides, Wise Fools,” and “Miscellaneous: Writings from the Hunterian,” among several other collaborations with artists and have written the slow book “Galata’nın Kıvırcık Cadısı,” in Turkish. Could you tell us a bit more about your future projects?

With regards to language, I would like to continue working in both English and my native Turkish. My dream would be to write books that are very different from each other content wise; books that are consistently surprising, and yet carry a certain, stylistic signature.

Practically speaking, I am currently putting the last touches on a Turkish novel about the first women alchemist in history. She was in this chaotic and beautiful city of ours for a while. I am also at the draft stages of a historical novel in English about sex trafficking. I hope to produce a trilogy of witches as well, the first of which came out with the Poet House, “Galata’nın Kıvırcık Cadısı.” In the meanwhile my short stories are piling up and it would be a dream to put them together in a collection soon. So there are several projects brewing in the witch’s cauldron at all times!

You have lived and worked all over the world – Scotland, Belgium, Hungary, the United States and Argentina among others – but are based in Istanbul. How does being both in and outside of Turkey feed you?

I love having one foot on the ground, and the other firmly in the air. Turkey inspires me endlessly. The moment you go out into the street, you are surrounded with stories. Characters you could not even imagine pop up daily in your life: at the bus stop, seated at the table next to you in a small cafe. You eavesdrop on insane tales.

The dark side of that, of course, is the political turmoil we are in continuously. The staggering number of femicides, and the daily abuse of basic human rights for anyone considered a threat to the system. Living and working abroad once in a while, helps me put all this in context. The good and the bad. I remember, for example, that we are operating as part of a much larger women’s movement and this gives me strength. The immense power, resilience, creativity and sense of humour of the women in this country leaves me in awe, over and over again.

Objectively speaking, you are a very successful person, with accolades in teaching and writing. Has there been a time you considered a breaking point in your life?

Thank you so much for your extremely generous interpretation and yes, there is one particular story I would like to share and it is about failure.

I spent a long time writing a novel that found a wonderful agent, but that never sold to a publisher. The feeling was of coming to the end of a staircase and expecting to find a door, only to be left faced with a vast open sky instead. For the longest time it was the greatest of disappointments, and then I began to see it as an opportunity to neither care about “success,”nor “failure,” in the traditional sense. Nothing that is created is ever lost if we decide to play, rather than succeed. This was an incredibly freeing discovery for me and I try to keep it close to my heart.

You have been writing personal fairy tales since the beginning of the pandemic. How did this project start and what does it mean to you?

It all started with a commission from a fellow Jungian Coach, Şebnem Toker. She asked me to create fairy tales for her loved ones, crafted specifically around their lives and thus begun the journey of writing for a singular person. I love this microscopic focus on desires, fears and pathways. I love turning it all into symbols that may help at various crossroads. I hope that the fairy tales function as friends. I craft them with this intention.

At the beginning I only wrote the tales, now I also illustrate and design the books. This has multiplied the creative pleasure. I have much room to grow and so much to learn, but illustration has become a passion that shall stay with me for life.

What do you do when you can’t do anything?

I gaze at the sea.

When did you last go on a date with yourself?

Yesterday. I went for a walk by the Bosphorus and got caught in the rain. When I put my hands in my pockets I discovered just enough money to buy simit. I went home eating it in the storm. An utterly lovely date.

Women’s rights because we still live in a world where the humanity of women is put under question, threatened and violated every single day.

What would you like to experience without paying a price for it?

I would love to know Greek, Arabic and Hebrew without the lifetime of effort it would take to master them.

When you put your hand on your heart and ask yourself “What do I need?” what is the first thing that comes to your mind?

That I need to love more, and do so with less attachment.

Can you stare your life straight in the eyes?

Yes, this interview made me feel exactly that. Scary at first, but then I got a wink!

What changes would make you happier in your life?

A grand change in Turkish politics would make me happier in my life.

A writer will write down your life. Who will it be?

Would it be okay if it were in Spanish? Then Roberto Bolaño.

What do you have in the pockets of your childhood?

My mum’s apple pie. Long walks in the mountain. Our dogs. A huge library. Olive trees. Deer coming down from Uludağ to visit us on misty mornings.

Does everyone have a missing piece?

I think so. And we grow in direct proportion to our acceptance of it.

If you could have seen what your life would be like before birth, would you still want to be born?

Yes! And I would want to be born a bit more quickly and live each day all over again with a bit more awareness.

What happens after death?

Who or what was I in previous lives and who did I hang out with?

What can I do to be the most useful, beneficent version of myself?

How do you enrich your life?

One of my favorite words is from ancient Greece: kalokagathia. It is a single word made up of two qualities: beauty and goodness. I try to go wherever this word leads me.

Your book is made into a film. Whats in the soundrack?

If I had to choose a single song: Nikos Papazoglou, Kaneis Edo Den Tragouda.

If I could choose a type of music on the loop forever: Rebetiko.