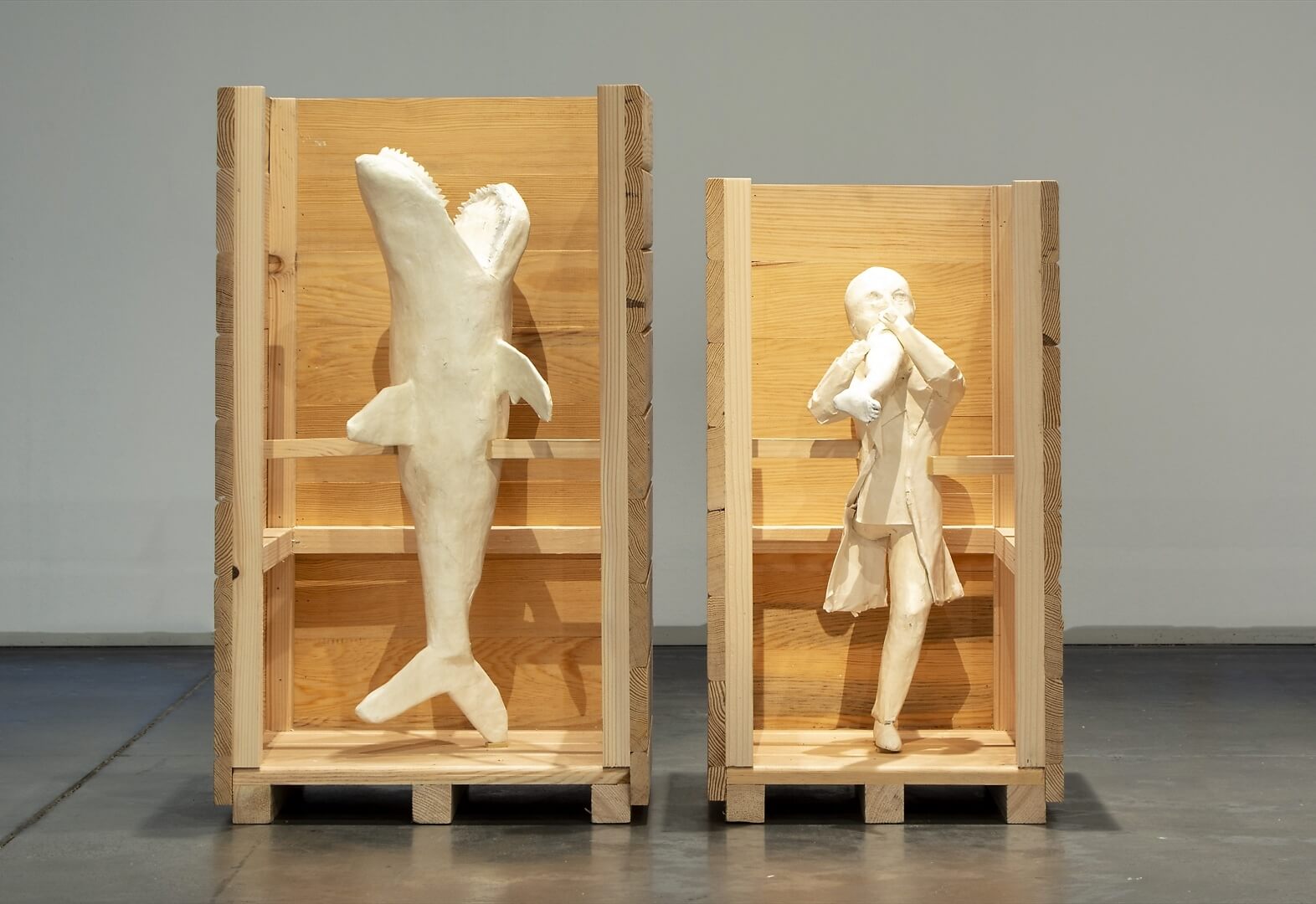 The exhibition Belkıs Hanım and Onur Efendi revolves around the identity of an “intellectual” that emerged with the process of modernization, and the turbulent states of mind that it brought about. Fatma Belkıs and Onur Gökmen question the possibility that the elitist avant-garde attitude attributed to the intelligentsia is inherited across generations from the Tanzimat era. The title of the exhibition, which involves the forenames of the artists, accentuates the witty tone of the works presented as part of The Sequential program. Comprising an excerpt from the duo’s first feature-length fiction film Alakadar [The Connected] (2018–ongoing) and a series of sculptures, the exhibition tackles the painful relationship established with authority, and the fear of failure in the context of artistic production.

A writer trying to make up for lost self-confidence, a painter tending to run away from responsibilities, and an actor having trouble finding the right words—The Connected is a dark comedy about three friends who struggle to make work in the wake of the previous generations of artists. After a rough day, Onur, Ceylan, and Hüseyin meet in front of an old trailer they’ve parked in a field near Istanbul. As the night goes on, the three friends get drunk and begin a reckoning with life over personal experiences and the haunting ghosts of the past. Bearing the burden not only of their personal histories, but also of the canonized understanding of art, they semi-consciously reveal their traumas, prejudices, and anxieties as if in a therapy session.

The Connected video is accompanied by sculptures that look unfinished or feel clumsy at first glance. Blending fiction and reality through humorous language, the works reinterpret the cultural mutations that occurred with the transition from the Ottoman Empire to the Republic of Turkey. Belkıs and Gökmen’s works reference to past events and myths through a range of depictions and allusions, rather than predefining the symbolic characters and structures they reflect on.

One of the sources of inspiration is the painter Osman Hamdi Bey, who laid the foundations of modern archeology in the Ottoman Empire and went on to become the founder and director of the Imperial Museum (today’s Istanbul Archeology Museums). Works with larger doses of irony such as Tahterevall-y [Si-saw], Ateşkes teslimiyetten neden farklıdır? [How is an armistice different from a surrender?] and Güneşe İsyan [Revolt Against the Sun] depart from the idea of ​​culture as a tool for modernization and depict the professional life of this versatile Tanzimat-era intellectual. The duo’s allusive depictions are not limited to anecdotes attributed to Osman Hamdi, but project into architecture as well. Addressing the aesthetic preferences of contemporary museums by exemplifying façade ornamentation, the work Geç olsun güç olmasın [Better late than never] highlights museology in its forceful role of representing the “modern” since its institutional emergence in Turkey.

Hitit Güneşi [Hittite Sun] refers to the Sun-Language Theory that was developed as part of national language studies in the 1930s, asserting that Turkish is the oldest language in history. Together with Biraz ordan biraz burdan [Best of both worlds], which deals with recitations of the “East-West dilemma,” both works question the controversial relationship between Westernization and modernization through a subjective reading of history.

Belkıs Hanım and Onur Efendi will be on view at SALT Galata until January 23, 2022. Detailed information on the podcast series to be organized with the support of Warehouse 421 in parallel with the exhibition will be announced at saltonline.org.