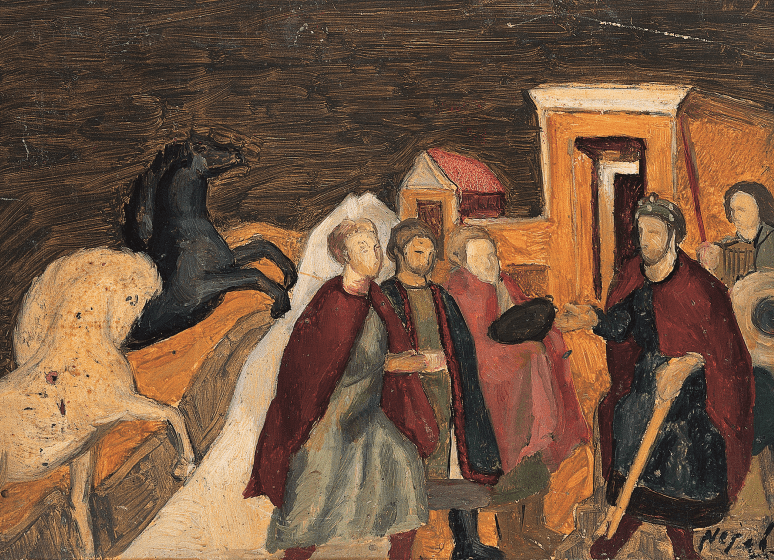 New Exhibition at the Pera Museum: “From Istanbul to Byzantium: Paths of Rediscovery, 1800–1955”

Organized jointly by the Pera Museum and the Istanbul Research Institute, the exhibition “From Istanbul to Byzantium: Paths of Rediscovery, 1800-1955” examines the central role of Istanbul in creating a new international and local awareness of its Byzantine heritage. Bringing together a rich selection of archaeological artifacts and archives and impressive animations, the exhibition can be visited at the Pera Museum until 6 March.

The Suna and İnan Kıraç Foundation Pera Museum and the Istanbul Research Institute simultaneously present two Byzantine exhibitions to art lovers. The first of these exhibitions, which focuses on Byzantine artifacts in the Istanbul Archaeological Museums, is called “From Istanbul to Byzantium: Paths of Rediscovery, 1800-1955” and sheds light on the development of Byzantine studies in Istanbul.

The exhibition From Istanbul to Byzantium is curated by the Byzantine art expert Brigitte Pitarakis, collaborating with Pera Museum and Istanbul Research Institute. The show, which examines the central role of the Ottoman capital in shaping Byzantine studies, focuses on an area that has not been studied enough until now and brings together an impressive selection of archives, especially the Byzantine collections of the Istanbul Archaeological Museums. Many important libraries, archives, and private collections from Turkey and the world contributed to this selection. Rare books, prints, maps, original archive photographs, documents, and pictures illustrated in a flamboyant style specific to the period were brought together in thematic integrity in the exhibition. Nejad Melih Devrim and Fikret Mualla’s Byzantine-inspired paintings reveal the impact of this heritage on modern art, while A. Tayfun Öner’s 3D animation, which deals with the extraordinary career of Istanbul-based astronomer Eugène Antoniadi, looks at Byzantium through the lens of science fiction.

In the nineteenth and early twentieth centuries, the intersection of geopolitical, diplomatic, academic, artistic, and local interests in Istanbul increased awareness of the Byzantine past as a rich and shared heritage. By taking steps to break the simplified orientalist view of Constantinople, archaeological finds are started to be reconsidered with a rational approach. Those who try to document Istanbul’s Byzantine past guide the preservation of the city’s cultural heritage and develop scientific research methods. These developments, which brought a scientific approach to Byzantium and have not been studied enough until today, are revealed in the exhibition From Istanbul to Byzantium: Ways of Rediscovery, 1800-1955, opened to visitors at the Pera Museum.

“Curiosity towards the ‘other’”

Curator Brigitte Pitarakis, who pointed out that the transformation of the Byzantine heritage into a wide area of ​​interest was examined for the first time in this exhibition, said, “With the construction of the Berlin-Baghdad railway and the opening of the Suez Canal, the foundations of the modern transportation network were laid in the late 19th century. With this development, geographical horizons began to expand, and with the developments in technology, curiosity about past civilizations and people who are called ‘the other’ today increased. This increasing curiosity led to research on past civilizations and especially Byzantium. From Istanbul to Byzantium, the exhibition shares the development of knowledge about Byzantium from the 1800s to 1955, and the process of turning Byzantine studies into a discipline, while examining the central role of Istanbul in creating this awareness. The exhibition sheds light on the complex subject of Byzantine heritage in modern history from the perspective of the political, economic and cultural actors of the period.”

The changing meanings of the Byzantine heritage

The first part of the six-part exhibition provides the background needed to understand Istanbul’s multicultural identity, its cultural and intellectual vitality, and the dynamics that led to the development of Byzantine studies in the West. While the second section presents research on Byzantine topography, architecture, inscriptions and artifacts, the third section examines the central role of the Museum-i Hümayûn (today the Istanbul Archaeological Museums) in reinforcing the modern state image of the late Ottoman Empire. In the fourth section, the visitors are welcomed with documents and photographs of the wooden housing texture of Istanbul, which disappeared with modernization, and the Byzantine ruins that emerged in the lands that were vacated due to fire and earthquake. In the fifth chapter, there are detailed maps prepared by professionals from different disciplines such as architects, photographers, cartographers and painters to record the Byzantine ruins, structure and topography. The last part of the exhibition shows the effects of the curiosity created by the rediscovery of Byzantium in Istanbul on artistic production.

Inspired by the symposium titled Exploring Byzantium in Istanbul: Scientists, Institutions and Struggles, 1800-1955 held at the Pera Museum, Istanbul’s economic, cultural and political changes between 1800 and 1955 on the Byzantine heritage and the restructuring of Byzantium. The exhibition From Istanbul to Byzantium, which conveys the discovery and transformation of this heritage into a wide area of interest, can be visited at Pera Museum until 6 March.