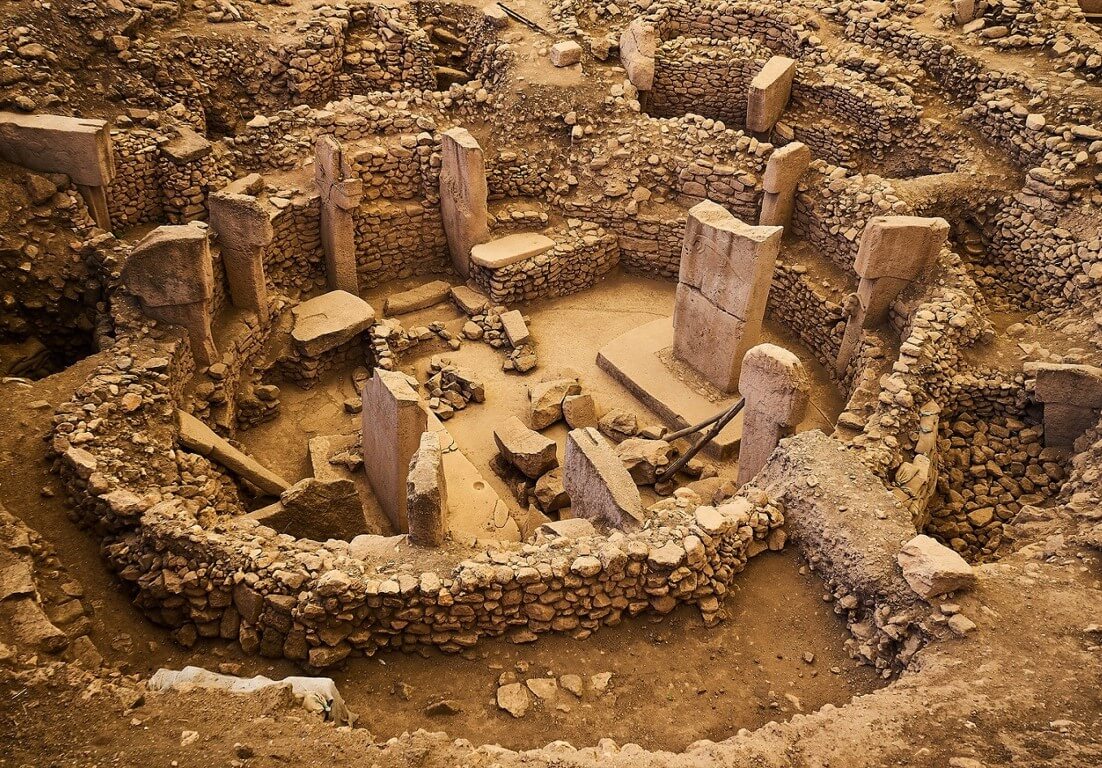 Göbeklitepe Archaeological Site is located 18 kilometers northeast of Şanlıurfa city center, near Örencik Village. The site was discovered in 1963 during a survey carried out in partnership with the Universities of Istanbul and Chicago and was identified as the “V52 Neolithic Settlement”. The real value of the area began to emerge with the excavations started after 1994. After these studies, it was understood that Göbeklitepe was a cult center dating back 12000 years.

In the middle of approximately 20 round and oval structures with a diameter of 30 meters, there are 2 “T” shaped, 5 meters high, independent columns made of limestone. There are also smaller columns on the inner walls of the buildings. The mentioned scientific data about Göbeklitepe provide important information about the Neolithic period in archaeological studies. It has been understood that Göbeklitepe is a unique sanctuary for the Neolithic period with its location, dimensions, dating and monumentality of its structures. The area yields important archaeological finds as it remained untouched in its natural environment for 12000 years.

Göbeklitepe, the work of a great organization and imagination, is the oldest monument of this size, and beyond the first, it constitutes the zero point of history in many senses. When man lived as a hunter-gatherer, the construction of temples that required advanced architecture caused astonishment all over the world. The temples, which reflect the belief world of prehistoric people and are enriched with animist figures, have made Göbeklitepe one of the most important discoveries in the history of archeology. Undoubtedly, in addition to this impressiveness, all kinds of data and scientific results about prehistoric life in excavations are of great importance in human history.

Göbeklitepe, which was the first temple to be built in the time of hunter and gatherer human societies, far from the concepts of settlement and agriculture, is known as the “biggest archaeological discovery” of recent years. The temple, which has not yet been answered how it was designed about 12 thousand years ago, draws all the attention as it was built about 7,500 years before the Egyptian Pyramids and Stonehenge in England.

Göbeklitepe, which is known not to be used as a settlement and serves for worship, was included in the UNESCO World Heritage List in 2018 with its astonishing monumental architecture. In Turkey, too, 2019 was declared the Year of Göbeklitepe. Göbeklitepe, only a tiny part of which has been excavated, has changed the history of humanity with its 12 thousand-year history. With Göbeklitepe, considered the world’s oldest and largest worship center, the effect of religious belief in the transition to settled life has been proven.

Göbeklitepe’s excavations were carried out in 1995 by the German archaeologist Prof. Dr. Klaus Schmidt started it and ran for 20 years until his death in 2014. B.C. It was abandoned after being used up to 8 thousand. It was not used for any other or similar purposes. Although only a small part of this prehistoric settlement, which dominates the Harran Plain, has been excavated, the extraordinary findings that have been discovered have turned much of the information about the Neolithic Age upside down.