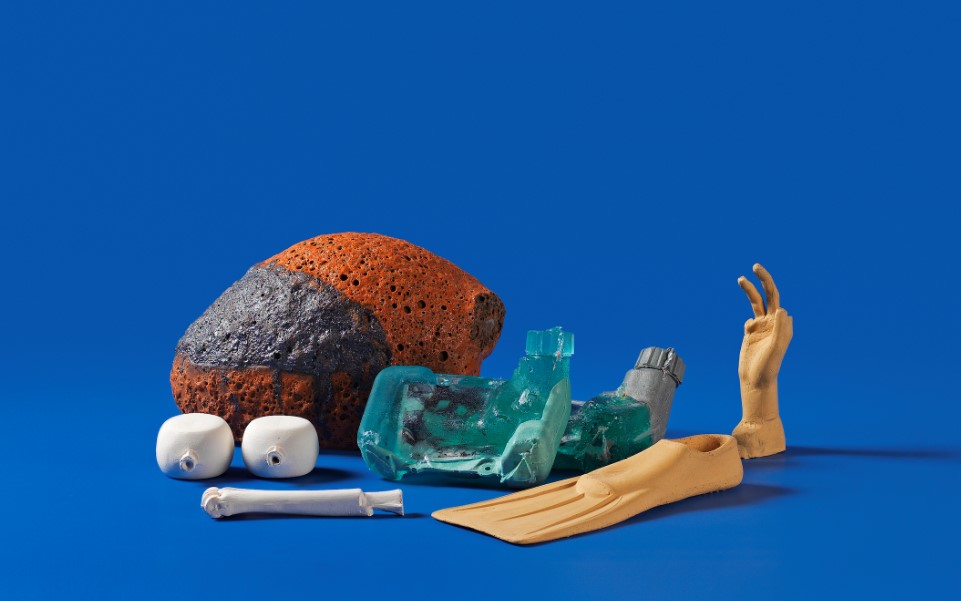 Emre Hüner’s solo exhibition titled [ELECTROIZOLATION]: Unknown Parameter Unrecorded consists of new productions shaped around a semi-fictional script. In the exhibition curated by Aslı Seven, Hüner frees the script, which she sees as an intermediary element between forms such as films, novels or architectural structures, from its function, and instead of reaching a final conclusion, she proposes an open production method, a script writing process. [ELECTROIZOLATION]: Unknown Parameter Unrecorded exhibition can be visited in Arter until December 5, 2021.

Sculptures, installations, photogravures, serigraphs, film sequences and texts, which take place in the personal exhibition of Emre Hüner, who works in drawing, sculpture, video and installation, entitled [ELECTROIZOLATION]: Unknown Parameter Unrecorded, opened on 25 March 2021. they reflect an improvisational, performative production process. Through aesthetic gestures such as recording, documenting, quoting, molding and copying, the spaces of the exhibition and the film propose a world fiction in which the object moves between the potentials of work, prototype, vehicle, tracer and acting. With its black-and-white film fiction with a total duration of more than five hours, the changing subtitles of the exhibition in digital media, with its spread to both space and time, differentiate the exhibition experience for each visit, creating multifaceted repercussions and open-ended possibilities of meaning.

As a concept, [Electroisolation] refers to an infrastructural machine-subject that makes itself felt through the differences and repetitions of scale and material among the forms in the exhibition, and produces fictional narratives, works and monsters that cannot merge with the artificial with the biological, the mechanical with the organic in pursuit. . While the endless lists ordered in an encyclopedic approach meet with the system of the 3D printer, a hand-work idea emerges between the glaze experiments of the artist and the improvisation practice of the body shop, plumber and electronics specialist.

[ELECTROIZOLATION]: Unknown Parameter Unrecorded, examines a relational field that lies between the practices of insulation and closure that define the experience of modernity as bipolar, and the contrast between conductivity and contagiousness. Body parts, machinery parts, variable states of consciousness, industrial wastes, architectural sections, medical prostheses, language games and speculative terms, construction and demolition tools, information and profession categories, parts from non-human life types, all keep each other’s records on the same plastic plane, they emulate and reproduce by copying each other.

While the forms that quote the closed architectural space arrangements such as the film set, factory, laboratory and campus invoke a sterile and science-fiction alienation throughout the exhibition, the black and white film sequences, the sound elements and sculptures that spread to the space are the underground whispers of the museum building and the urban texture surrounding it, the well-known archetypes. and now they carry their bodies to the space.

As a semiotic machine, [Electroisolation] releases new self-reflexive layers and scales that constantly document its production process and context, turning every new form and medium it touches into an orbit around its center.

Emre Hüner’s artistic practice, who works in drawing, sculpture, installation and video media, focuses on fictional narratives and eclectic assemblages that examine utopia, archeology, progress and future ideas through the re-imagination of architectural structures and questioning the materiality of organic and artificial forms.

Aslı Seven is an independent curator and writer based in Istanbul and Paris. He focuses on the processes of infrastructural forms of violence taking shape through the built environment in his research and projects; It adopts fieldwork, critical fiction, and collective production methods as founding methods for healing, caring and community building.

In 2019, she received her doctorate degree in artistic research from ENSA Bourges and EESI Poitiers-Angouleme in France. Since 2014, there have been curatorial collaborations with Arter, Protocinema, Pi Artworks, Galerist and Bilsart in Istanbul and with CNAC Magasin (Grenoble) and Galerie La Box (Bourges) in France. 2016 FIELD Association with the support of Manila, Philippines joined the organized ICI Curatorial Intensive Original Seven, AICA Turkey and ICI (Independent Curators International) is a member. Seven participated in the guest curator program at Cité Internationale des Arts in Paris with a CNAP (Center National des Arts Plastiques) scholarship in 2020.

ARTER IS OPEN BETWEEN TUESDAYS AND SATURDAY

Within the framework of the normalization process rules announced by the circular dated March 1, 2021, the practice art museum Arter, which is closed on Sundays until a new information, is open to visitors between 11:00 – 17:00 between Tuesday and Saturday with necessary health measures. In addition to the Arter building, where 400 televisions can be accepted at the same time and social distance rules are applied in its galleries, Arter services, which offer free transportation, are regularly disinfected.

With the support of the Corporate Sponsor Tüpraş, entrance to Arter exhibitions is free for viewers of all ages on Thursdays; Young people under the age of 24 and Arter Together members can visit Arter free of charge every day. No tickets are required to enter the Arter building’s exhibition in the Library, Bookstore, Bistro by Divan, backyard areas and Gallery 0.

Thanks to the support of the transportation sponsors Ford Otosan and Otokar, Arter can be reached easily from Taksim and Tepebaşı with free shuttles. For a safe visit, all health measures taken in Arter, up-to-date information about the visit and transportation can be accessed on the museum’s website, arter.org.tr/ziyaret visit.