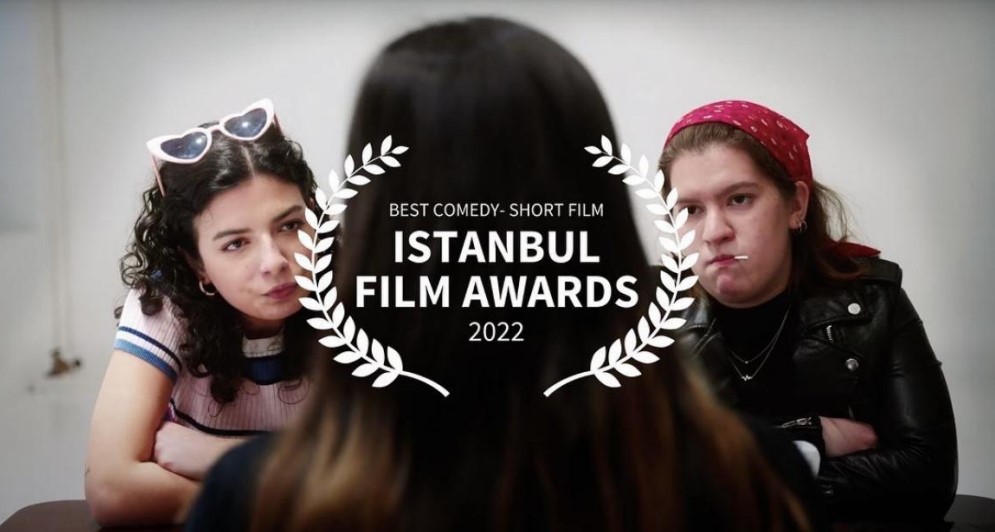 Angel is directed by Amelia Annen, written by Deniz Bulat and produced by Invisible Disco Productions.

Angel and Satan have to work together when they are recruited on a new mission for God in a modern setting. They struggle with each other and their mission while trying to decide on the fate of an immortal man.

Angel was filmed mid-2021 as NYC was returning back to life after the beginning of COVID Vaccinations. It was filmed in two days, in multiple exterior locations in the East Village of NYC and Alchemical Studios. Angel was produced through crowdfunding, with the contributions of our monthly donors, and suggested donations from previous projects. Please check out Angel’s IMDb page for more information.

Angel was shown at a private screening event at Manhattan’s famous Angelika Film Center along with some other Invisible Disco productions and the “Emerging: A Virtual Film Festival” winners.

Invisible Disco Productions is an entertainment production company endeavoring to create work that values emerging artists and the ownership of their voices, the joys and benefits of collaboration, and a grand old time.

Invisible Disco has been active since early 2020 and since have produced multiple works in different mediums including but not limited to some on stage performances such as This Feeling (2020), a one-woman-show written by Amelia Annen and Lauren Montes, directed by Thea Throndson and Sarah Ruhl’s Melancholy Play (2022) directed by John Trindl. Invisible Disco also have been focusing on producing short films: Roadtrip (2021), Rural (2021), Dinosaur Day (2021), Angel (2021). Currently all short films are in the festival circuit.

During the thick of the pandemic Invisible Disco aimed to push boundaries of multimedia arts and tried to foster an environment that inspires artists to create their own work. During that period they focused on producing digital content and created All Work, No Play Festivals where Invisible Disco brought together actors, writers, and directors to produce short plays from new playwrights. Invisible Disco also hosted a digital production of Sartre’s No Exit to raise money for Girls Inc. NYC. Later, Invisible Disco Productions created Writer’s Block Party, which is a podcast that that hopes to share the work of emerging artists and to break down the all too often mysticized process of creating and developing art.

For more information on Invisible Disco Production please visit our website and our Instagram and check out this interview with some members of our team in 2021.

Director: Amelia Annen
Amelia Annen is a filmmaker, actor, director based in New York City. She is known for Thank You for Coming (Merci D’etre Venue) (2021), Cryptic Clues and Girl of My Dreams (2021). After directing Angel in 2021 she has directed a dark comedy short film, Dinosaur Day. She most recently directed another short film Rural (2021) and the music video to Caroline Elise’s song Prom Queen. Annen is a graduate of NYU and has a BFA in Theatre and a minor in creative writing. For more information visit Amelia’s IMDb page and her website.

Deniz Bulat as Angel:
Deniz Bulat is an actor, writer, producer known for her work in Angel (2021) and This Is Me Eating___ (2021), a devised immersive performance produced by Et Alia Theater. Her most recent acting credits include Enough About Love (2022) by Jamaad Pictures and Öte (2022) by Junda Productions. Additionally she was in Loners by Stonestreet Studios, Stupid F**king Bird and Romeo and Juliet both in Atlantic Theater School. She is a graduate of NYU Tisch Drama. She has spent most of her time collaborating with Et Alia Theater and Invisible Disco Productions. When she is not acting she works as production manager and assistant director for independent films. Visit Deniz’s website and IMDb page for more updates on her work.

Lauren Montes as Satan: Lauren
Montes is an actor, writer, comedian, and filmmaker. Originally from Los Angeles, she recently graduated from NYU Tisch Drama. She has experience in sketch, improv, and stand up as well as theater and film. In addition to acting in Angel (2021), she recently performed in and co-directed Shakespeare’s A Midsummer Night’s Dream, and produced Invisible Disco Productions’s short films. Previously she has acted in Atlantic Theater School’s Production of Accidental Death on an Anarchist. Here is the link to Lauren’s website for more updates on her work.

Miranda Kang as God: Miranda
Kang is an actor, writer, improviser and director, known for Thank You for Coming (Merci D’etre Venue) (2021), Mechanical Bulls, Angel (2021) and directing Roadtrip (2021). Miranda has studied at NYU Tisch Drama. During her time at NYU she performed in an improvisational comedy group, Pasadena Golf Club, which came in first place at the National College Improv Tournament. Visit her IMDb page for more updates on her work.

Zack Canonico as Miles:
Zack Canonico is a New York City-based actor and recent a graduate of NYU Tisch Drama. Zack enjoys telling collaborative stories rooted in humor and honesty. Zack is a founding member of Derailment Theatre Company and appears in the company’s podcast The Tower Demos, written by Amy Staats. Visit his website to see more of Zack’s work.

Ryan Hudzik as Bad Guy:
Ryan Hudzikis an actor, singer, and writer based in NYC. He is a graduate of NYU Tisch’s New Studio on Broadway. Ryan continued his work as a featured cast member in the Musical Improv Show “Eight is Never Enough” at the Broadway Comedy Club.

Do you want to watch our film?

Please contact us through emailing either invisiblediscoproductions@gmail.com or denizibulat@gmail.com for further information or to access our film!